Well looking at this ball can anyone predict what this can be,  well Google has played another gig by launching its 25-watt amplified obsession and named it Nexus Q. six months ago Google predicted that Google TV would be embedded on the majority of next-generation televisions by this summer. But sadly that hasn’t happened and Google comes up with its very own media streamer. It actually works as a receiver for video and audio content companies’ own online media services.

The Dimension of Nexus Q is what makes it more interesting, the Q is a 2-pound sphere, split at a 45-degree angle by a ring of 32 LEDs. Makes it look more tempting. The entire upper half of the Q is a free-spinning volume knob, whereas a pinprick Blue LED eyes from the front, by the way, it’s just not for the style it also reveals the location of the Q’s touch-sensitive mute button.

Inside that spherical is a decidedly more square dual-core TI OMAP 4460 processor CPU paired with 1 GB of RAM, the same as Galaxy nexus, and along with 16GB of flash storage are included. With a bunch of both micro HDMI and optical audio outs, an Ethernet jack, and a USB port. Makes it purely a streaming device, connecting over 10/100 Ethernet or dual-band 802.11a/b/g/n WiFi to pull media only from the cloud.

The Look wise Nexus Q is Good and at such a price this device makes you buy this. The matte finish makes it feel great. Though it has a tendency to pick up smudges and smears rather quickly it’s not very noticeable when it was sitting next to the Television. For initiating this users should have an Android Device to control and manage it for any media streaming.

When you power on the Nexus Q the user is presented with the image of the blue sphere on its Television, along with the welcome not in different languages. When you connect and on the nexus Q with the Android Device it first initiates the downloading of Q’s Management App. Upon Launch, the user can select what room he into is and enter the password for the WiFi network, but here the problem arises with the stability of connectivity.

There is no way else to control your device but the app. Google gives a very short window of interface for the user, the only way to control and changing of setting’s can be done via only an external App. User can adjust the brightness of the LEDs on any of the Q’s he connected, can also control the various output jacks, or can change the visuals during track play. The functionality is good, but somewhere it can be found very outdated to control such basic settings when under the hood there is a device running Android 4.0.4 on a dual-core A9 processor.

In Nexus Q the streaming is initiated by within one of three Android Apps: YouTube, Play video or Play Music. The real thing is that it doesn’t stream the content through the android device in fact it just works as a remote control that sends, telling Google servers to send media down to the Q over the web.

The Nexus Q best Serves in the parties as with the 25-watt amp it’s just too loud enough to fill up the average apartment, and with speakers, it gives a clean and very detailed sound! In this sense it’s a buy, buy a device for those who always host the party and other functions. Other than that while playback, the LED ring on the Q responds in sync with the rhythm and volume of the music, the pulses and other various light effect makes it seen very cool. The LED brings life into this sphere device.

But the Drawback is just coming, while attempting to mute the Q it just reveals it’s hardware weakness, it’s doesn’t work that well, and sometimes even requires more time and the worst part is of restoring audio during playback.

In nexus Q the video is either initiated by YouTube or the Play movie app as discussed above. The content playing through YouTube was impressive but yet the video from the play movies App, however, was not as promising as YouTube.  It was suffering from exaggerated and overly dark images while playing.  This the place where Google needs to work on.

Users may find themselves counting the things that the Q Couldn’t do rather than those it could, which somewhat makes it fail.

Never Judge a book by its cover, this pretty much works on the Nexus Q. The Tempting LEDs light and Glowing Ring around it can make you feel like it’s a device with many potential, but sorry to say with so many functionality gaps and buggy feature with buffering and bad quality of video along with the only compatibility, makes you somewhat thinks thrice, before buying this. As if you really need this or not, along with the fact that it price around $300. The Nexus Q can work in pace like, office, parties, and other occasion with many Android devices around.

The Basic Concept of Media Streaming is somehow failed in Nexus Q just because of its limitation with only 3 Apps. 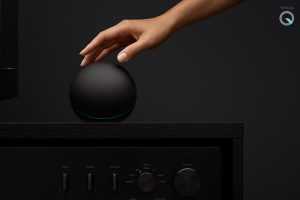 The Dimension of Nexus Q is what makes it more interesting, the Q is a 2 pound sphere, split at a 45-degree angle by ring of 32 LEDs...